A Word on Motivation

Don't blame people, avoid punishing them, empower people, let them to Drive themselves, motivate people positively. Have you heard about this stuff? I have a lot. Basically I agree, but...

A friend told me a story. His is the owner of some organization from the IT industry. Once the organization cooperated with dishonest supplier who hadn't paid the VAT tax related to their businesses for couple years. (in Poland VAT tax is the way how the sate sicks up the poorest subjects, but it's another story).

During the tax control they obviously discovered the trick an punished the supplier. As a consequence of the case weak invoices were mandated to be removed from the accounting system. Technically there was no business between my friend and the supplier. But my friend deducted VAT tax, so Tax Office request him to refund it. Two million Polish zloty (it's over $500k) in 14 days...well, this is the law.

But he survived, found the win-win solution with Tax Office. Was he motivated positively? I don't think so.

When I think about my business carrier (it has took 7 years since I started our company) I went through lots of fuckups. There was: tiny organization, little bit larger one, almost bankruptcy, UE project with a lot of madness around, we were cheated by a salesman we trust and so on and so forth.

When some investor was unsatisfied because of project one blamed personally me, I was refused so many conferences I even remember, when we started DevCastZone.com I received heaps of emails from frustrated users with many reasons: err 404, to slow, to expensive, I expected something else and so on and so forth.

You know, for the last eight years I was motivated mostly negatively by the environment I worked in. Really! Of course there were days, workshops, coaching sessions when I met attendees needs and it was fucking awesome. These days are like a pearls - they are worth to challenge every single day.

Despite all these things I sill have fun at my work. Actually thanks to these events I achieve all stuff in my work: businesses, books and articles written, presentations made, friends. So, what the hell the idea with positive motivation??
Posted by Unknown at Friday, July 17, 2015 No comments:

Just Do It! Pattern

Hope you have read the Fearless Change by Linda Rising. In not, Just Do It!

Well, Just Do It! it's one of the patterns Linda described to introduce new ideas to the organizations. This is a short story how to use it.

Once I coach an organisation. I was mostly focused on the work with management board, my friend coaches the developers.

The have also group UX Specialists who work together in one room. They serve many projects and customers and were really frustrated about their WIP, relationship to the other teams and to the whole organization as well.

We met in the kitchen and I was told how they work and what kind of stuff they deal with. We almost set meeting for the workshop following week, but...STOP! Let's do something NOW!

They asked themselves just two questions:
Pretty hug questions, huh? Because of lack of empty space we wrote all that on the window. 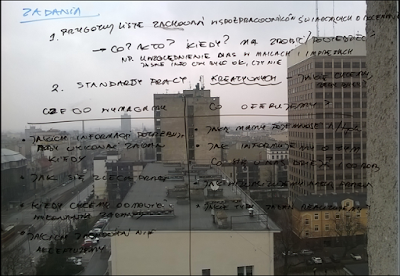 And that's all. It was 15-minutes long Just Do It! Pattern case. Leaving the room I said casually: Listen guys, you might think about this window. I would back following week.

Next visit in the UX room were really surprising. The cover all isses with possible can-do solutions. 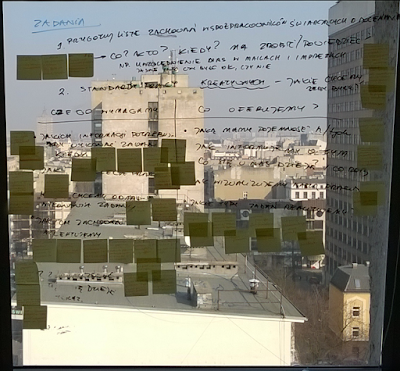 Starting from that point we ware able to do some deeper analysis of their current situation. 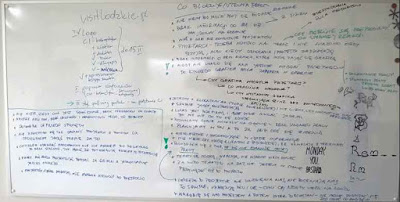 Again, we did a one week break to re-thing all that. So, I was really touched when I saw this: 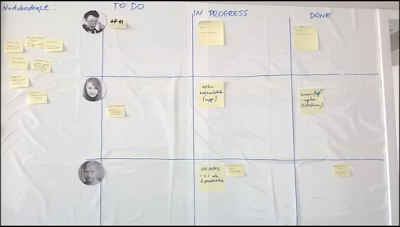 They take matters into their own hands. They start to visualize the workflow, to track distractors and WIP, they founded standards of UX-craftsman in the organization. But remember were they start - at the window.

Well, big changes are really difficult, but teeny-tiny changes are quite easy. So, Just Do It!
Posted by Unknown at Thursday, July 16, 2015 No comments: